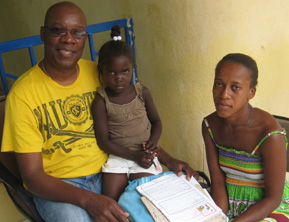 My name is David Boliere, President and Executive Director of Spare-A-Coin 2savchildren, Inc. I left Haiti and migrated to the US when I was a teenager. A few years later, I enlisted in the US Army where I served our country for nearly 15 years. My tour of duties included a combat duty tour in Iraq, “Operations Desert Shield/Desert Storm” (1990-1991), two tours in Korea (1988 and 2001), one tour in Germany (1992-1995), and a temporary duty assignment during “Operation Sea Signal,” a humanitarian relief effort in Guantanamo Bay, Cuba (1995).

However, one of the assignments that had the most significant impact on me was the temporary duty tour I served in Haiti during “Operation Restore Democracy” in 1996. During that time, I was in a position to get a firsthand look at starving children scattered in some of the busiest streets in the capital city of Port-au-Prince begging for money and food. Some of them were little babies carried by their desperate mothers, in need of someone to lend them a hand. It wasn’t uncommon for me to stop and give a few dollars to a hungry child or a hopeless mother. I strongly believe that children are gifts from God and when they need us, we should open our hearts to help them as much as we can. This experience was one of the most significant factors that lead me to create Spare-A-Coin 2savchildren, Inc in July 2012.

After I left the military, I used the G.I. Bill and went back to school to further my education. I attended Florida Atlantic University where I earned both a B.A in Criminal Justice and a Masters in Public Administration. I am currently serving proudly in the public sector.